Towards a Global Consensus Against Corruption 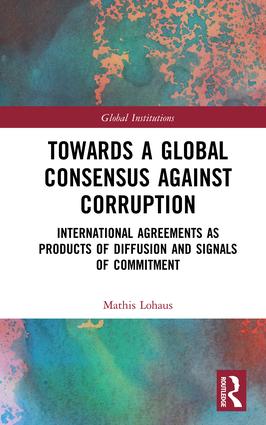 Since the 1990s, many international and regional groups have adopted international treaties, protocols, and other documents to address corruption. My book is guided by a simple question: What explains the similarities and differences between international anti-corruption agreements?

I compare the contents and legal design of agreements, finding evidence of communication and copy-and-paste between cases.

Still, diffusion processes did not lead to uniform results. I argue that agreements serve as signals of commitment to fight corruption at home and through international cooperation. The scope of issues covered and the degree of legal obligation depend on who the audience is: domestic constituents, other member states of the same group, or development partners. In addition to a comparative analysis of agreements across the globe, the book contains two case studies on the Organization of American States and the African Union.

The book has been published in Routledge's Global Institutions series. They offer a hardcover and multiple online versions. Publisher page Online access (DOI)

The argument: Diffusion and signaling motives

Conclusion: Lessons to draw from the global patchwork

I compare the scope and legal design of anti-corruption agreements adopted by nine international and regional organizations: The Organization of American States (OAS), the Organisation of Economic Co-operation and Development (OECD), the Council of Europe (COE), the European Union (EU), the Southern African Development Community (SADC), the Economic Community of West African States (ECOWAS), the African Union (AU), the United Nations (UN), and the League of Arab States (LAS).

Chapter 2 contains the core of the comparative analysis – a thorough mapping of substantive anti-corruption provisions in those documents plus an account of how many provisions are verbatim copies (or very similar). The high frequency of copy-and-paste across cases suggests that international anti-corruption agreements were shaped by diffusion processes. For the sake of transparency, I have summarized the key anti-corruption provisions in all documents under investigation, indicating those that I counted as similar. Please get in touch if you have any questions! PDF download